As the chiropractic industry celebrates 125 years since its founding on September 18, 1895, the profession has achieved “Essential” recognition. During the pandemic of 2020, the Department of Homeland Security officially labeled chiropractors as Essential Service Providers. This designation is an important clinical, scientific, and public relations breakthrough that has been long overdue.

Their patients have known this for over 100 years. Federal courts have made judgments in chiropractor’s favor. Now, more people than ever are lining up to utilize chiropractic care, not just for back or neck pain, but as a holistic primary solution for living a healthy, drug-free life – their ideal 100 Year Lifestyle.

With all of the prehistoric stigmas from chiropractic’s early years extinct, millions of individuals, families, and athletes enjoy and experience the essential nature of chiropractic care, utilizing chiropractic services not just for crisis care but for family, lifestyle, and performance-based care.

Companies have embraced chiropractic care, including their services for reimbursement. Many companies like Google, Standard Process, and others provide on-site chiropractic services for their employees. Professional, Olympic, college, and youth sports teams have chiropractors as key members, and even leaders, of their healthcare teams.

And maybe most importantly, millions of families have made chiropractic care their primary choice to help them raise healthy drug-free kids. Rather than wait for a crisis or deterioration to set in, more people are wanting to live at 100 percent throughout their lifetime – one of the goals that many chiropractors have for their patients and practice members.

The Rocky Road to Essential

In 1987, United States District Judge Susan Getzendanner found the American Medical Association (AMA) and its constituents guilty and in violation of the Sherman Antitrust Act on the grounds that they intended to obliterate the chiropractic profession. The AMA took insidious, unfounded action to contain and eliminate the chiropractic profession with accusations of being unethical and unscientific, and to position the medical agenda at the forefront of healthcare.

During this famous Chester C. A. Wilk et al. v. AMA et al. case, records revealed that medical doctors were encouraged by the AMA to exploit chiropractors and accuse them of wrongdoings. The plan included the creation of a committee on quackery and outlined the “containment of the chiropractic profession” that “will result in the decline of chiropractic.”  This plan was detailed with action steps from denying chiropractors from being in hospitals to opposing insurance coverage for their care, to even comparing them to dogs.

This epic 11-year battle and chiropractic victory opened the door to new opportunities for the chiropractic profession to assume their rightful place as health care leaders delivering holistic healing and drug-free health care. Now, it is common for chiropractors and medical colleagues to openly work together on behalf of their patients. 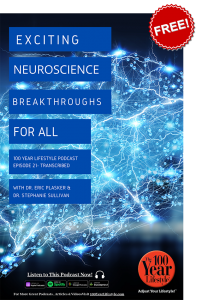 Science is Catching Up to What Doctors and Advocates Already Know

Gravity existed long before the apple fell on Isaac Newton’s head! This same concept is true for the healing principles of the human body and its relationship to chiropractic care.

There have been exciting breakthroughs in Neuroscience, quantum mechanics, biology, and the immune system that have given the chiropractic profession a boost within the scientific community. The principle of neuroplasticity, the connection between the nerve system and immune system, the understanding of arthritic changes as they relate to poor posture, and many other findings, have given confidence to the public utilize chiropractic care first, before turning to non-corrective, potentially addictive pharmaceuticals.

Nerve supply is essential for your cells, tissues, organs, and systems to function and perform properly. This is true for babies, toddlers, kids, teens, college students, pregnant moms, working people, fitness buffs, parents, senior citizens, and everyone else with a spine and nervous system, regardless of their age. This is the foundation of chiropractic practice with many techniques, specialties, and styles of care that have evolved over time.

Chiropractic techniques may vary as well. One chiropractor may focus on the spine and nervous system only while others may include extremities, instruments, or complimentary services. No matter the style, a healthy nervous system and the correction of subluxations are a priority.

The self-healing principle that chiropractic is based on is why healthy people as well as people with all types of symptoms, imbalances, and diagnoses utilize chiropractic care, often as a part of their lifestyle. 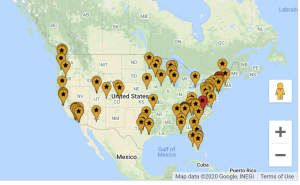 Opportunities abound with 68,000 chiropractors compared to 1.1 million medical doctors in the United States alone. Chiropractors are graduating at a rate less than the world needs to replenish those chiropractors that have retired or passed away.

With 19 chiropractic colleges in the US, the largest chiropractic school is Life University in Georgia which also offers undergraduate programs, a healthy campus life, online education, and a vibrant alumni base. Their world-renowned Life Leadership Weekend is a way for prospective students to learn about the profession to see if it’s aligned with their personal holistic values.

Outside of the US, the need is even more dramatic. With only 12 chiropractic schools in the entirety of Europe, many countries do not have a school at all. As an example, the European Union has 700 million people and less than 5,000 chiropractors. Even more shocking is China with some 1.3 billion people and only approximately 20 chiropractors. The demand is growing and it needs to be filled.

The Largest and Safest Drugless, Non-Surgical Health and Healing Profession

The effectiveness of chiropractic care is as exciting as it’s cost and safety. Malpractice rates are significantly lower for DCs than MDs, which helps keep both the cost of care and the risk to the patient down significantly.

The Doctor of the Present

Many of the doctors who are a part of The 100 Year Lifestyle Network, and others who are in private practice, have become leaders in their community through education as well as the care. With Big Pharma corruption being well-publicized over the past decade and their distrust by the public being high, chiropractors have “naturally” filled the health care gap for individuals and families. They have become “The Doctors of the Present.” 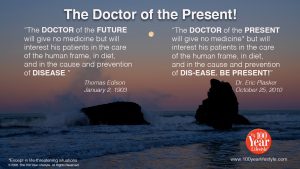 A healthy spine and nervous system are essential for a healthy life, especially if you could live to 100. Make the most of every day, adjust your lifestyle, and enjoy a sensational century.

Special thanks to Jenene Cherney for contributing to the creation of this article.